Cardiff Council are developing proposals for five Cycleways to support and promote cycling for all ages and abilities. The proposed routes will connect communities to major destinations across the city, including the City Centre and Cardiff Bay.

Cycleways will provide continuous routes that are intuitive and comfortable to use and separated from motor vehicles and pedestrians where needed. 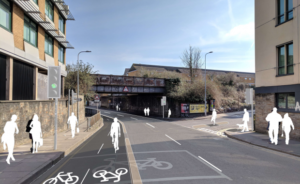 Although the suitability of the term ‘cycle superhighway’ is still in debate, the idea is pretty simple: a continuous path that will provide a safer, faster and more direct journey to and around the city.  It is hoped that the cycle superhighway will revolutionise the commute with it being the best and quickest way to get to work, and make it more appealing to those who want to get on their bike but do not feel safe with it being separated from motor vehicles and pedestrians wherever possible.

The Cycleways will be developed from proposals in the Integrated Network Map which sets out a 15 year plan to improve routes for walking and cycling in the city.